Mystery surrounds a picture of a police van flipped over on its side in the middle of a road in London.

The strange sight was discovered on Google Maps Street View.

The tool, which was launched in 2007, allows people to navigate the globe and discover unreachable locations.

It has even caught couples in the middle of acts like romantic proposals.

But in the latest discovery, users have spotted something very odd.

A police van is inexplicably tipped on its side.

This particular image was spotted in Limehouse, London.

This sight was spotted on Google Maps’ satellite image setting. 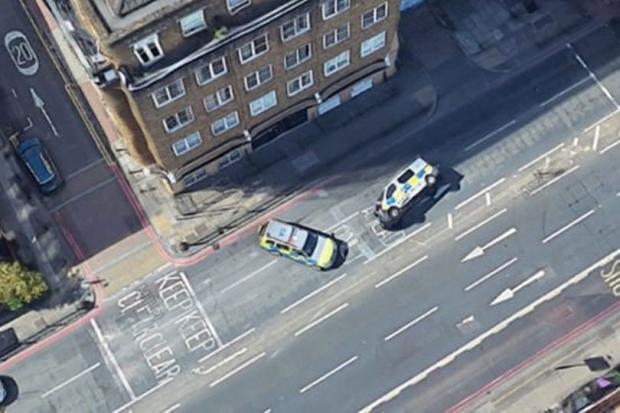 If you look closely, it becomes clear there are a few police cars on the road.

The road has plenty of markings on it including two “keep clear” signs and a few bus stops.

Not much more can be seen from the satellite image, but the van seems more or less in tact.

The sighting was spotted on Google Maps by a Reddit user who captioned the image: “A flipped over police van in London.”

The image was immediately inundated with comments from fellow users.

A Met Police spokesperson said without knowing exactly when the incident occurred, they were unable to say what had happened.

The police car was spotted in London

One Reddit user suggested: “The van just wanted to get its good side for the photo shoot” while another wag added “He’s just takin’ a nap.”

Another said: “Let that be a lesson to us all. Keep clear clear means KEEP CLEAR CLEAR.”

Last month, we revealed Google Maps is set to receive one of its biggest make-overs since it first launched 15 years ago.

The popular mobile and desktop feature has been evolving from a powerful navigational tool to a robust daily companion, that also offers helpful information about where to go and what to do, for many years.

Google are rolling out new visual improvements that bring even more detail and granularity to the map, making it easier to understand what an area looks like whether you’re exploring virtually or seeking increased detail in the environment you find yourself in.

Sujoy Banerjee, Product Manager at Google Maps Soon, said via a blog post: “You’ll be able to see highly detailed street information that shows the accurate shape and width of a road to scale.

“You can also see exactly where sidewalks, crosswalks, and pedestrian islands are located–crucial information if you have accessibility needs, like wheelchair or stroller requirements.

“These details are particularly helpful as more people are opting to walk or take other forms of solo transportation due to the pandemic.

“We’ll start rolling out detailed street maps in London, New York, and San Francisco in the coming months, with plans to expand to more cities over time.”

Google Maps also has high-definition satellite imagery for over 98 percent of the world’s population.

With a new color-mapping algorithmic technique, the tech firm are now able to take this imagery and translate it into an even more comprehensive, vibrant map of an area at global scale.

Almost 700 galleries, theatres, cultural institutions and sector workers have applied for help from the Mayor of London during the coronavirus pandemic. This Is Local London…

A man has been charged with the murder of a 37-year-old man. This Is Local London…

A man has been arrested on suspicion of murder after a fatal stabbing. This Is Local London…

Sanitary products should be made available for free at Brent Civic Centre to help tackle period poverty, councillors have said. This Is Local London…

Richmond has been named among the happiest places to live in Britain. This Is Local London…