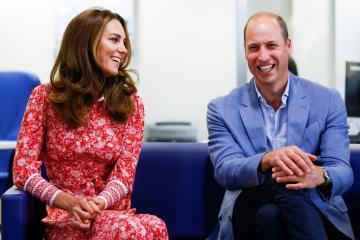 The Duke and Duchess of Cambridge have been pictured in London today.

William and Kate spent the afternoon touring the area and visited the famous Beigel Bake eatery in the heart of Brick Lane.

The 24-hour bakery has become the staple of clubbers, shift workers and tourists drawn to its renowned salt beef bagels, which give a taste of the food once popular with the East End’s former Jewish community – now largely replaced by Muslim residents.

Beigel Bake was forced to reduce its opening hours during the pandemic and the duke and duchess were told how this affected employees, and heard how the culinary institution helped the local community through food donations and deliveries.

The couple also travelled to the nearby East London Mosque and London Muslim Centre in Shadwell, and chatted to volunteers who cooked and delivered meals to vulnerable members of the community during the pandemic and dropped off medication or grocery parcels.

William and Kate also met those who benefited from the support, a project which has received financial help from the National Emergencies Trust – which has William as its patron.

The royals began their day at the London Bridge Jobcentre, where the duke and duchess spoke to a group of customers who are now jobless following the Covid-19 outbreak and are receiving support to move back into work.

Employers also spoke about their experiences trying to help people find jobs during the outbreak.